This is my Great Aunt Ada. 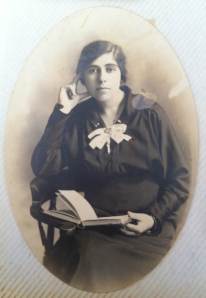 We came across the photo in an old album and it triggered a cascade of memories for my 91-year-old mother. Ada  had Tuberculosis. She lived with my grandparents for some time, when my mother was a child, and is remembered as a wonderful aunt. My mom adored her.

When Ada died, nobody told my mother. She vividly remembers being sent to a neighbour’s house while the adult family attended the funeral. Not that she was informed that there was a funeral. My grandmother told her that Ada had gone away to England.

My mom was old enough to understand that her beloved young auntie, who had been ill for a long while,  had died.

Although it happened eighty years ago, my mom has never forgotten that her mother didn’t tell her the truth…

10 thoughts on “What should we tell the children?”

I’m a teacher, a learner, an inquirer…